The regional level in Denmark is constituted of five regions.

The regions have between 0.6 and 1.6 million inhabitants. In terms of surface, the smallest region, Capital Region of Denmark covers 2,561 square kilometres, whereas the largest, Central Denmark Region covers 13,142 square kilometres. 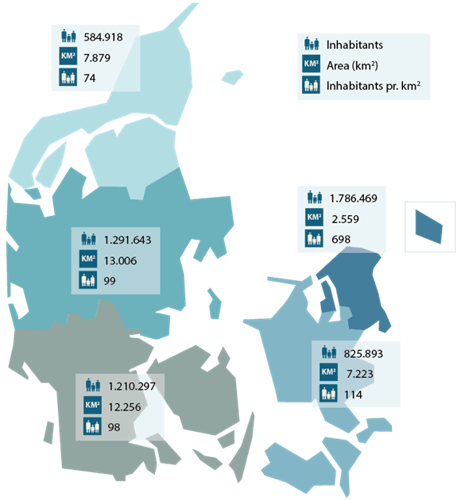 The regions were established in 2007 after the Danish government decided on a structural reform defining new local and regional structures. The purpose of the local government reform was to create a strong and forward-looking sector solving tasks efficiently for the benefit of the citizens.

The reform shaped a new territorial structure; the fourteen counties were abolished and five regions were established. At local level 273 municipalities were reduced to 98. The main guidelines for delimitation - in terms of geography and tasks - were provided for in the Agreement on a Structural Reform.

Read more about the local and regional government in the publications listed below.

The tasks of the regions include health care, operation of social and special education institutions as well as regional development - all complex and comprehensive tasks that need a decentralised solution.

The regions are also responsible for tasks within the areas of public transport, tourism, education and soil pollution. This means that the regions have the responsibility for planning the development in each region in cooperation with the municipalities and other local players.

Finally, the regions are employers for staff employed in the health care sector and thereby are responsible for negotiating salary and workings conditions with employees.

The Regions in brief (pdf)